Now that the Oscars are over, I am going to share my thoughts and opinions on what I believe was the biggest snub this year.

I think I am becoming a bit disillusioned with the Oscars.  It’s unfortunate because I’ve always seen the Oscars as my “Super Bowl”.  But I’m finding as the years go on, there seems to be a chasm developing between my tastes and those of the Academy.  For example, last year I put all my [proverbial] money on Hidden Figures.  Don’t get me wrong, I thoroughly enjoyed Moonlight and found it powerful.  But I found Hidden Figures to be just as strong and important of a story as Moonlight, I found it better directed and written, and as a result of the writing, better acted.  I felt Mahershala Ali, though a fine job, simply acted a role that was not very complete and didn’t garner what I would consider an Oscar winning performance over, say Dev Patel in Lion.  I feel Taraji P. Hinson could have and should have won Best Actress, but she wasn’t even nominated.

This year, I have a variety of feelings about the movies and people nominated, though I will say, I’m rather content with the wins..  Though mostly positive, a few things got me pursing my lips.  One was all the buzz behind Three Billboards Outside of Ebbing, Missouri.  Though I will concede and say Frances McDormand and Sam Rockwell were deserving of statuettes, I felt the rest of the movie had been hyped up.  Many things of the movie were quality, but not the best.  My personal pick from all the movie (and yes, I saw all of them), was I, Tonya or possibly The Shape of Water (which clearly won).  Why did I choose those over Three Billboards? Maybe it’s simply personal taste, maybe I felt the writing, the direction, the art design, everything was all just a bit tighter.  But, whatever, it’s simply my opinion.  There is one aspect of this year’s Oscars that I simply couldn’t get over and accept: Michael Stuhlbarg. 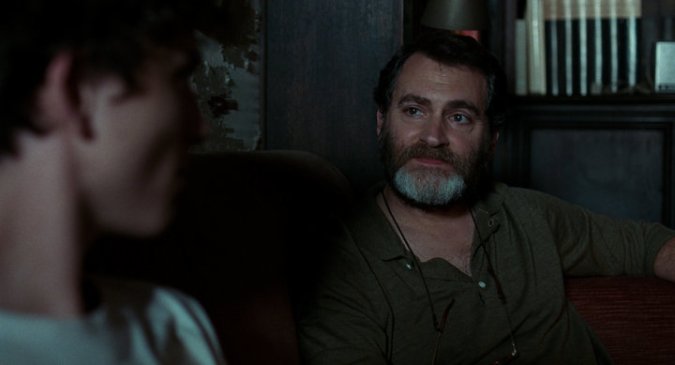 Michael Stuhlbarg and Timothée Chalamet in Call Me By Your Name

The sheer fact that he did not get nominated for Best Actor in A Supporting Role for Call Me By Your Name was beyond incomparable to me!  His monologue at the end of the movie is what Oscar winning performances should be made of.  This was one of those moments where all things that produce a beautiful work of art came into play.  The carefully crafted writing, the actors delivery of the language, the direction given to the actor and his response.

He took a very academic monologue and delivered it in a way that any young person in his son’s position would hope to hear their father say exactly that.  It was the moment the entire movie was building up to. As far as I could assume, Michael Stuhlbarg must have felt that the movie was sitting on his shoulders; that this moment was the moment we the audience had been waiting for, whether we knew it was coming or not (hint; we didn’t), that if this monologue wasn’t executed just right, the film might fall flat.  And he delivered.  Boy did he deliver.  I have seen it three times now, and it only gets more powerful.  Now, all of this isn’t to discredit the rest of the film and those involved.  Of course not. It was a strong film on many levels.  One of those happen to very prominently be Michael Stuhlbarg.  So, for him to not have been nominated for this role is a decision I simply do not agree with.

Michael Stuhlbarg has been one of those enigmatic actors where, until this year, I always recognized him, but I could never seem to remember him.  Part of that reason is simply how transformative of an actor he is.  Prior to this year, I have seen him in four prominent film: Lincoln, Steve Jobs, Trumbo, and Blue Jasmine where he played the roles of George Yeaman, Andy Hetrzfeld, Edward G. Robinson, and created the character of Dr. Flicker respectively.  He is always in secondary roles it appears.  Yet in each one of these films, he commands his presence on screen and captivates the audience with his versatility.  He’s aggravating as Democratic leader George Yeaman bickering with Tommy Lee Jones’ Thaddeus Stevens.  He’s strong and clever as Andy Hertzfeld standing firm and calculated to Michael Fassbender’s Steve Jobs.  He’s utterly creepy and heinous as Dr. Flicker assaulting Cate Blanchett’ Jasmine.  He is heart rendering as Edward G. Robinson defending himself against Bryan Cranstons Dalton Trumbo.  He holds his own on screen with these heavy weight actors and at times, outshines them.  Hollywood keeps calling him, as his credentials this year include not only Call Me By Your Name, but The Post as well as The Shape of Water, where his interactions with Michael Shannon and Sally Hawkins made the audience wonder where this particular character was going to help steer the story.

His body of work is impressive, his versatility makes him indispensable.  He is a true artist and a magnificent actor.  I can be upset that he was snubbed by the Academy (and I am), but the way his star continues to rise, it’s clear that he is a well-respected artist in the business.